Passion for photography and archivism 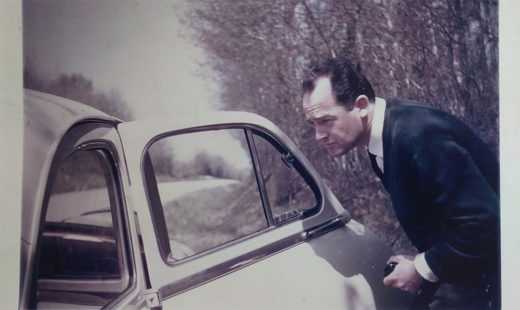 In the French city of Nant, Khaled Ramadan met the 88-year-old French soldier George Auvrignon who was almost born with a camera in hand.
The Auvrignons documented all family events for three generations without interruption. George Auvrignon’s images and footage included and represented happiness, life and peace, but not the war.

In 2011 Ramadan came across George Auvrignon’s film and photo archive, and he digitized and recorded the entire archive for artistic treatment. The actual archive dates between 1900 and 2011 and is full of surprises, stories and information.

The archive consists of glass negatives, photos, paper prints, super 8 and 16mm films, photo slides, VHS videos, MiniDVs, and modern digital memory cards. Surprisingly, next to the archive lays all the camera models and projectors which the Auvrignon family used to film and photograph their own history.

The archive documents a family’s life progression throughout 100 years. The archivists at work were two members of the Auvrignon family, George’s father Philip and George Auvrignon himself.

During World War II, George Auvrignon volunteered to join the allied forces in the US to help liberate his country from the Nazis. As many other French volunteers, he left from France to Spain, claiming he was a Canadian citizen willing to go back to his home country.

In Spain, George was captured by General Franco’s army and jailed for three months. He was released when Canada claimed him together with many other Canadian citizens.

From Canada George Auvrignon joined the allies in the US and was sent to fight against Nazi Germany. The allied forces landed in Normandy on June 6 1944 where George Auvrignon was assigned to shore. He became one of the survivors of the D-Day at the Normandy landing.

George Auvrignon’s archive reveals him as the director of own live. He was a true archivist at work. George didn’t only witness and document the growth of his family but also the evolution of technology. At the farmhouse, George kept all the cameras he managed to operate throughout the years, from the family’s first LEROY camera – a stereo-panoramic with two lenses dating back to 1903 – till modern digital Sony camcorders.

The quest in this regard is why George Auvrignon chose to exclude the war from his archive. During the visit to the farmhouse in Nant, George’s archive revealed lots of secrets and personal information about the war. The missing and hidden archive, the images and footage that are now digitized, will formulate the core of what Ramadan will exhibit together with two other artists.