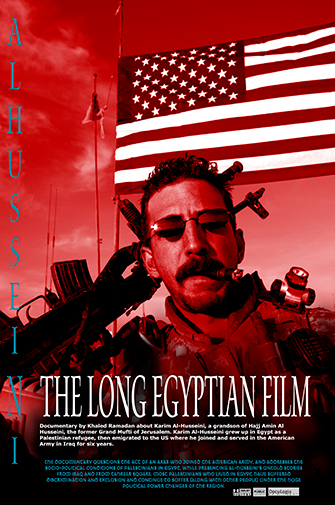 As many Arab artists in his generation, Karim Al Husseini’s art is a reflection on the self, transferring his personal history into a subject matter and making his art a self-narrative.

Born in Libya of Palestinian parents, Karim Al Husseini grew up in Egypt and then migrated to the US, the Netherlands, and Malta over the course of 10 years.

As the grandson of Hajj Amin Al Husseini, the former Grand Mufti of Jerusalem, Karim Al Husseini desires to educate himself and cultivate his cultural background by exposing his visual and audio practices to the world. To date, he has shown, performed and ran workshops between Kuwait and Mosul (Iraq), exhibited in Bamako (Mali), Turin (Italy), Cairo (Egypt), and Sharjah (UAE).

He is known in cultural circles as an artist and activist, and not an American military man. For him that is history. After serving in the American Army and working in different fields, from culinary to owning a company specializing in the distribution of crystals, Al Husseini has become a producer of various sorts of resistance art.

There are several reasons why Al Husseini is producing art. For him it is not about breaking away from the stereotypical image of military personnel returning home from war. What motivated him is the social, political and human conflicts. He wants his art to inspire us and teach us how to live and understand conflicts.

Karim Al Husseini, a Palestinian-American who joined the US Army in 2004, revealed his artistic strengths during his service in Iraq. One of his first traceable works is attributed to the American flag, which the artist designed and made out of his old uniforms from three different sets.

The first shade was taken from his DCU (Desert Combat Uniform), the second was the BDU (Battle Dress Uniform), and the third was the then-new digital print design. Each uniform carried tones of grays, greens, blues and yellows associated with the requirements for the camouflage they were meant to be worn for. Al Husseini then adapted the designs to the American flag, addressing the star spangled banner, so that each red and white stripe and star where toned with a color that reflected the army's bearings on the territories controlled.

The double-sided fabric of approximately 100x150 cm hung over Al Husseini's bed during his second term of service in Iraq where his first team was no longer with him. This was the artist's way of taking his team with him, keeping them close and in mind at all times. It was during the same term that Al Husseini started to record the sounds of his experiences, be it in hope, fear, loss and questioning. Al Husseini documented his sentimental values in his life as a Palestinian in service of his cause.

Karim Al Husseini wanted to change the Arab world by joining the American Army. After serving in the Marines he is trying to fight the Israeli occupation of his family’s home country his own way, from distance, by producing resistance art.

Karim dreams of visiting the family house and land in Jerusalem, which he has never seen, and invited us the film him during his trip. During the trip, he reflects on his background and history, the current reality, and prospects for the future in a time of political change.