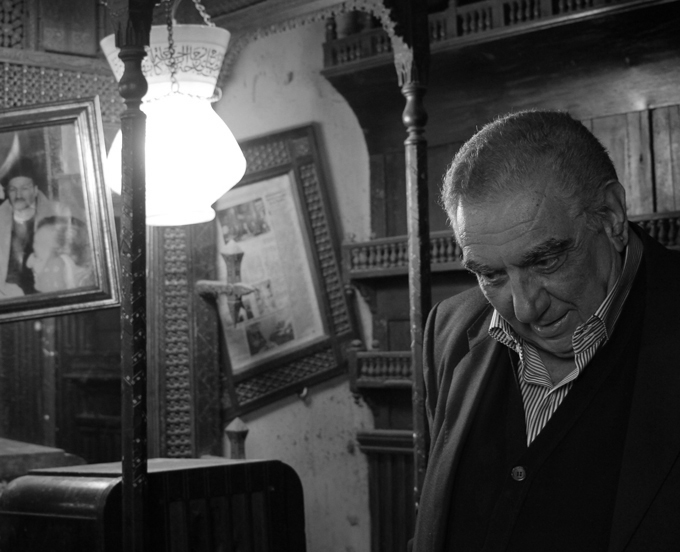 For more than two centuries, El Fishawy café has been an inviting respite within the labyrinthine tangle of the 14th-century Khan el Khalili bazaar in Cairo.
Café El Fishawy played host to artists, musicians, students and intellectuals, including – most famously – Nobel laureate Naguib Mahfouz who wrote parts of his prize-winning Cairo Trilogy in a back room there. Ahmed Rami, who used to write songs for Umm Kulthum, also frequented the coffee shop. Even King Farouk once sat in one of its narrow halls.

Between 2012 – 15 Khaled Ramadan invited Munir El Fishawy, Wajdi al-Hakim, Gamal el-Ghitani, Amin El Deeb and Volkhard Windfuhr to talk about their relation to the café and the social and political history of Egypt. Several secrets about the history of famous songs and political events were revealed for the first time during the interviews.

Café El-Fishawy is a feel-good TV documentary series reflecting the compassionate relation between man and his physical surroundings, focusing on events related to social and cultural life, politics and history, thus turning places into witnesses of historical events through personal stories.

The program provides first hand historic knowledge from central figures who are unique because of their accomplishments, history, and intervention in the public realm and for raising critical issues and debate them in Egypt and across the Arab world. Most of them have suffered socio-political setbacks, which they had to fight individually or collectively in the name of social justice and equality, to change their own lives and the lives of others for the better.

Munir El Fishawy is one of the inheritors of Café El Fishawy. He works as a journalist and is an important link to the people and history of the place.

Wajdi al-Hakim was an Egyptian journalist and one of the Arab world’s most known radio presenters. Since the beginning of his media work in the Union of Radio and Television in Cairo he conducted interviews with personalities such as President Gamal Abdel Nasser and he was the only journalist to interview the Egyptian singer Umm Kulthum.
Wajdi al-Hakim, passing away one year after the recording of this interview with him at Café El Fishawy.

Gamal al-Ghitani, was a novelist, short story writer and journalist. He was apprenticed as a child with a carpet maker, and worked in one of the Khan el-Khalili factories, before becoming a war correspondent for the Egyptian newspaper Akhbar al-Yom. He later founded Akhbar el-Adab, Egypt’s most prominent literary publication, which was viewed as an independent voice, often critical of the state. Gamal al-Ghitani passed away in 2015.

Egyptian poet and songwriter Amin El Deeb is one of Egypt’s most known spontaneous public poets. He has written several songs for known Egyptian and Arab singers, and he was arrested several times by the Mubarak regime for his political opinions and poems.
In the interview he revealed the very village and place where the song Taht El Shagar Ya Wahiba (Under the trees oh Wahiba) was written, a song that was made known by the famous singer Mohamed Roshdy (1928-2005).

Volkhard Windfuhr is a German journalist and Arabist. For over 25 years he was correspondent for the German paper Der Spiegel in Cairo and the Middle East. He has conducted interviews with Libyan President Mouamar Kadafi, Sudanese President Jafar Nomiri, and Imam Khomeini.